Anthea West is the Dublin based creator of Fate, an all-ages fantasy story that began in print and turned to the web. As well as Fate, she’s released The Earthbound God – a fantasy graphic novel – and Sleep Tight – a short collection of horror comics.

You’ve been working on Fate for a long time now. Did you always plan on releasing it as a webcomic?

Short story: Yes. Long story: The plan was to release it as an issue series until chapter 3 and then start releasing it was a web series along with the issues. However, I soon realise, after chapter 2, that printing and selling issues were a handful and pretty expensive over time. I went back and tweak a few things in the original chapters, coloured them and placed them on the web while discontinuing the issues. I enjoy selling graphic novels far more than issues anyway. 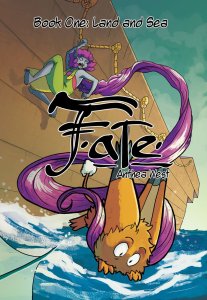 If you were to start again now, would you do anything differently?

I would have changed some plot things, very minor things that no one else would have noticed except me most likely. I would give myself more time between chapters to not only write and layout pages but to get a month’s worth of pages completed. A buffer is a webcomics best friend as the old saying goes.

Your Kickstarter last year was fully paid on the first day. What do you think helped with that?

I think it was a good mixture between being involved with the Irish comic community for years beforehand, having already built a small audience for Fate since 2015 and I had recently joined a webcomic collective called Ink Drop Café some months before the Kickstarter. They are such a wonderful and welcoming group and they helped a lot with the advertising of the KS over the month. They were also there to give a lot of moral support and advice and I’m super indebted to them.

What would you advise to other creators looking to Kickstart a book?

Build your audience first. Advertise what you’re creating long before the Kickstarter. Get your name out there, let people know who you are and sort of things you are creating. Remember that Kickstarter is a platform, not a guarantee of success. You’re only going to get as much as you put in.

As well as all-ages fantasy, you’ve also worked on horror. What made you work in a different genre?

I’ve always enjoyed horror. Not so much as getting spooked in the middle of the night but that’s a given when you consume the scary stuff. I had always wanted to make some horror comics, I use to write a lot of horror in my teenage years but I just never really got around to it. The final push was when the 100th person told me I could never do horror or “serious” stories because of the style of my artwork.  Let say, spite can be a wonderful motivator.

If you could only work in one genre, and you had to choose between all-ages fantasy like Fate, or horror like Sleep Tight, which would you choose?

Fantasy, no question. It’s a bit of a cheat answer as fantasy spills over into other genres easily such as horror and adventure while still being fantasy. Besides, my horrors are all shorts, fantasy tends to be where my long-form story ideas live. I have a lot of long-form stories planned for the future.

What’s your one tip for people wanting to make a start in comics?

Just start making comics. Don’t worry about perfection, or about being good. Good will come later. Right now just hop in and learn. Start with short stories, work up to issue-length stories and if you want to, move onto graphic novel length. Making comics and sharing them online or IRL is getting into comics.

What’s next for you in the world of comics?

More Fate certainly. That should be returning after its long break in June. This summer or next September I’ll be releasing another, longer, horror anthology called Interloper, so keep an eye out for that. My patrons over on Patreon get previews and sneak peeks into that every week. I’m also near the end of writing my all-ages graphic novel, Ash Tree, a story where a young girl called Aisling is shrunk and forced on an adventure with a hyperactive fox and has to learn, very quickly, how to be brave. 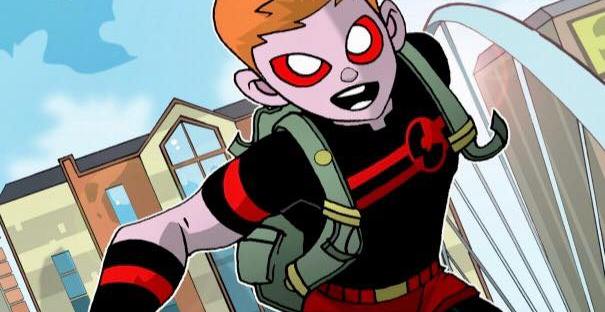 In 2007, Jason Browne was part of the creative team that launched Buttonpress Publications, with its flagship title The Wren. Set in Dublin, and featuring a team of superheroes known as the Flying Column, The Wren is Ireland’s longest running small press comic. It’s an all-ages story about heroism and trying to find your place among people who knew your parents better than you ever could, while trying to figure out how to balance life as a superhero with school. In a rare moment when Jason isn’t working on The Wren or any of Buttonpress’s other books in the series – Artos, Thimble and Stoat – he’s been working on a graphic novel that’s set for release later this year: Cahoots.

The Wren is the longest running Irish small press comic; do you think there’s anything special about the book that has let you keep it going all these years?

Yes, perseverance! In an industry that is mainly an adult medium nowadays, deciding to work in an all ages could be shooting yourself in the foot. But! I went with heart instead of head when deciding to go for it.

What made you decide to introduce new characters like Artos, Thimble and Stoat?

Hibernia had become such a rich environment. We had spent a lot of time building the background to the world and there was such a diverse choice of avenues leading to other great stories. They needed telling.

Running four comics at once, how much guidance do you give your writers for their stories to keep them tied together?

So, I know the characters pretty much inside out before even starting the first panel. For example, with Stoat. Ciaran Marcantonio and myself had initially a totally different idea for the character but then the lightbulb moment. I enlightened Ciaran to the idea and he was totally on board with it. It is then fleshing out story, plot, characters and environments. Once we were happy, the drawing began.

I always have a basic plot idea for as to where I want to go with a character. Writers are very clever and adaptable people and so they take my plot and weave their magic.

Each of the current characters are based in different areas of Hibernia and so story crossovers are not usually a problem unless purposely intertwined (see War of Fal!!)

How did it feel giving up some of the creative process to other writers?

YAY! But seriously, a collaborative project is what fires my creative engines and so love it.

You’re one of only a few all-ages creators in Ireland; what made you want to release a book like that when Ireland was still developing its small press scene? Have the younger readers made it more worthwhile?

If you take the Incredibles, Boom Studios Power Rangers series and Harry Potter. All generally considered all ages and initially aimed at a young audience, yet adored also by adults. I am one of those adorees! (is that a word?) Luckily readers of all ages read our books and get what we are doing with such a diverse cast of characters, relationships and settings. I remember a comic podcast reviewing the Wren issue 2 and thought “Superheroes in an Ireland doesn’t work!”. We are now on issue 13 of said book and so my advice is believe in your story, writer, and characters, and they will deliver. It is still mind blowing to think that people of all ages, await your next issues. That and getting to fulfil a passion, make it all worthwhile.

What can you tell people about Cahoots, which you’ve been teasing bit-by-bit online?

NOTHING! Muhwa ha! (Editor’s note: this is about as clear an answer anyone will ever from Jason on this one until he’s ready to release it!)

What’s your one tip for people wanting to make a start in comics?

Don’t do it for fame or money. If that is your initial goal, go on X Factor if you can sing or buy scratch cards to get on de telly. It’s an art form and so like all art forms, it has its ups and downs. If someone spends time writing a script for me to draw, I want to deliver the best I can to compliment the words and in doing so, creating a little piece of magic, i.e “We made a comic book!”

If your passionate about the medium, go for it but it takes work (that dreaded word!), like everything else.

Aside from Cahoots, what’s next for you in the world of comics?

Buttonpress is heading to the U.S! So, we are lucky enough already to be on sale in so many countries, including the U.S but this will be our first comic con there. Baltimore Comic Con 2018 is our destination and will be sitting and chatting with giants in the comic book world, so no pressure…eep!

War of Fal makes its debut later this year, we will be in Dublin this year for Small Press Day, and lots more but will be announced later in the year (Wink!)