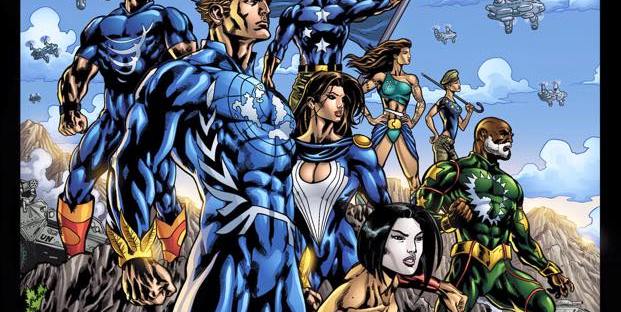 Nigel Flood of Punt Press got in touch with me lately to see about reviews of a few of his books – and he was quick to send on issue #1 of The Globalists, and issues 1-3 of Celtic Clan in the mail. So, full-disclosure for this review, they were free review copies. Reminder, also, that when it comes to comics, I’m not overly critical; I love to explore the reasons I think people will enjoy a particular comic (which helps in recommending the books people would enjoy!) With that said, onto the review.

Not Your Average Superhero Comic

The first thing that will be apparent from the cover of the book: it’s a superhero book. It looks every bit the genre; Kevin Keane certainly knows how to draw for the market. The characters – and we’ll get onto them in a minute – are fully brought to life in a way that’s typically expected of the Big Two. Before readers get into Nigel Flood’s tale, there’s an instant feeling of familiarity that helps ease newbies to the writer’s work into the book.

And what a book.

Intriguing from the very start, The Globalists presents us with an unknown narrator in a prison cell, a glimpse at the snarling face of one Adolf Hitler, and a concise expository history lesson on the Superhuman Arms Race. From there, it’s all downhill. And uphill. It depends on your perspective.

As a first issue, the book manages to fit in a lot. We’re given a measure of the powers at play (pun 100% intended), the backstory to the issues at hand in the modern day, a glimpse at the protagonists, and a sense of the scale of danger presented by the antagonists. I’m a sucker for superhero stories. I devour them greedily. And I need more of this from Flood and co.

While some stories start a little unsure of themselves, Flood gives us an established dilemma and philosophy, to be explored in greater detail as the series continues. All we need now is a release date for the next issue. In the meantime, you can get a copy of the series debut from Punt Press directly, or in Forbidden Planet Dublin, while stocks last. Recommended for fans of superhero comics looking for a fresh take on the genre.